Kat and I were married in August of 2008, and sometime around August 2018 we started talking about a getaway to celebrate our 10th anniversary.

Needless to say it took some time for us to get our acts together, but earlier this spring the stars aligned and extra timeshare points from one set of grandparents combined with babysitting from the other to give us an amazing Caribbean break. 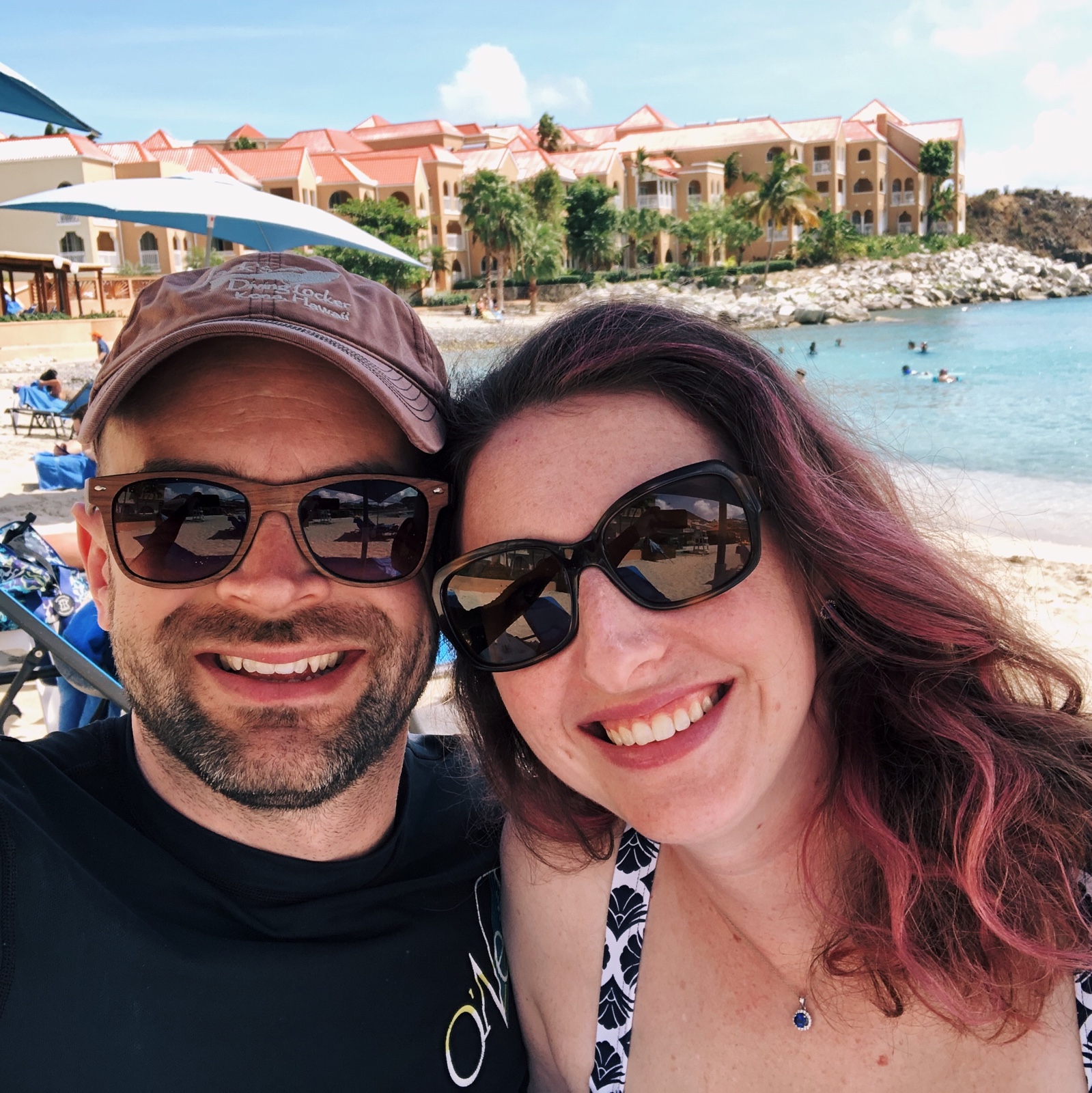 We normally would have perseverated over which side to stay on, but in this case our accommodations were a gift and that decision was made for us. Good thing too because it let us just focus on enjoying ourselves and we ended up at an amazing resort (more on that below).

We also ended up visiting both sides frequently anyway – it’s easy to drive between them. The border is open (no checkpoint) and the island is small. Driving from our resort on the south coast to dinner in Grand Case on the northwest coast usually took about 15 to 20 minutes.

So bottom line don’t worry too much about which side you stay on – pick accommodations you like, rent a car and enjoy the whole island.

The beach side of the resort faces west towards Little Bay. In addition to a long stretch of sand there are 3 pools and several restaurants overlooking the sea.

On the other side of the peninsula there is no beach but the view is still impressive, including cruise ships steaming in and out of Great Bay on a regular basis.

Once we discovered the infinity pool tucked into the hillside at the back corner of the resort it quickly became a favorite late afternoon destination. Away from the bustle of the beach, the soundtrack of water cascading over the infinite edge was infinitely relaxing.

The food options at Divi Little Bay kept us pretty happy too, in between excursions to true culinary gems throughout the rest of the island. Everything was surprisingly fairly priced, given the resort setting.

There’s a small cafe with good coffee and take-away lunch options, and a couple of restaurants. Gizmo’s had decent burgers, but painfully slow service, when we stopped in the day we arrived while waiting for our room to be ready. The candlelit dinner at a private table on the beach, however, was both delicious and attentively served. 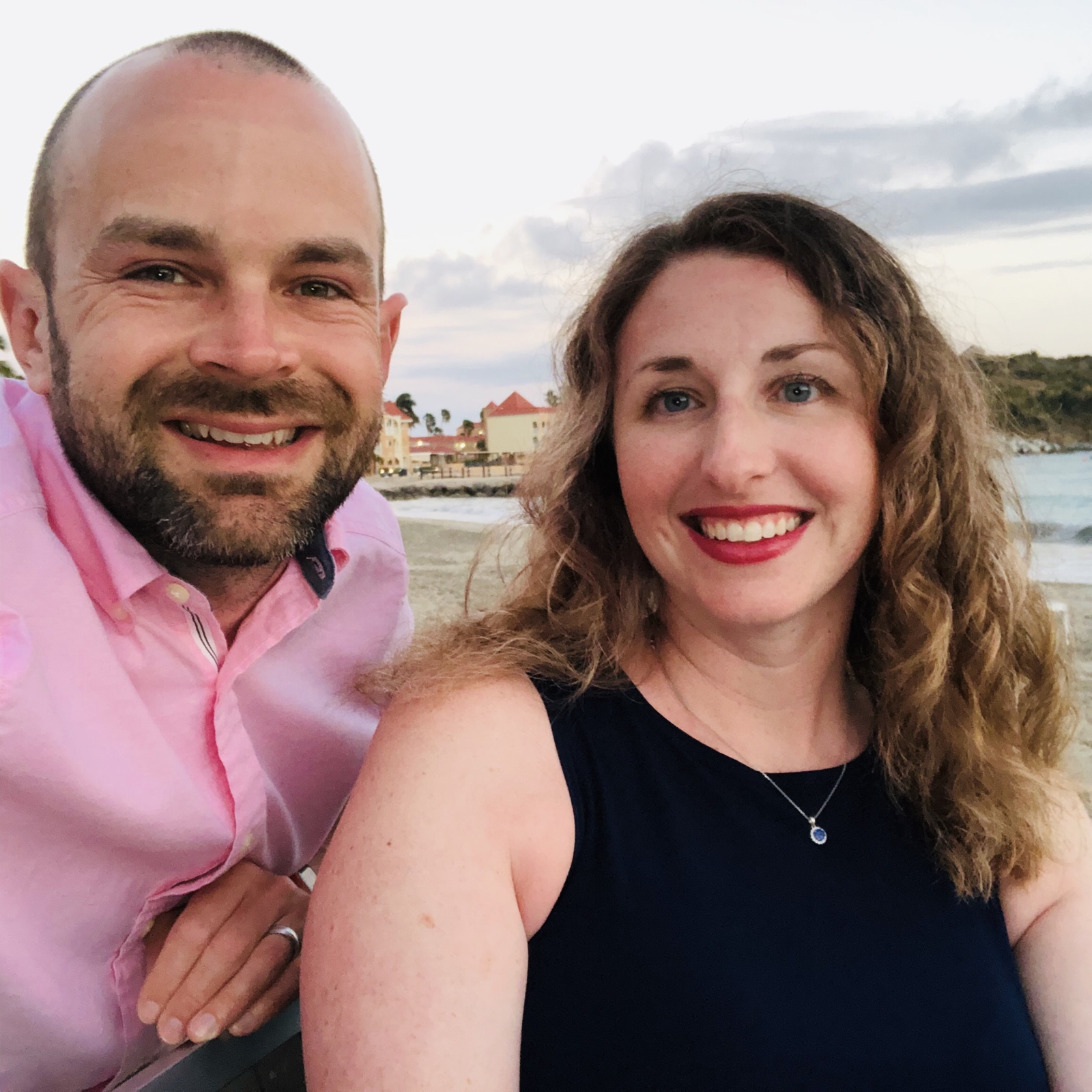 Our room overlooked the beach and was happily located a little ways from the commotion around the main restaurant area. “Our” section of the beach was a bit more laid back as well and we loved being able to just walk downstairs and be on the sand in a few steps. 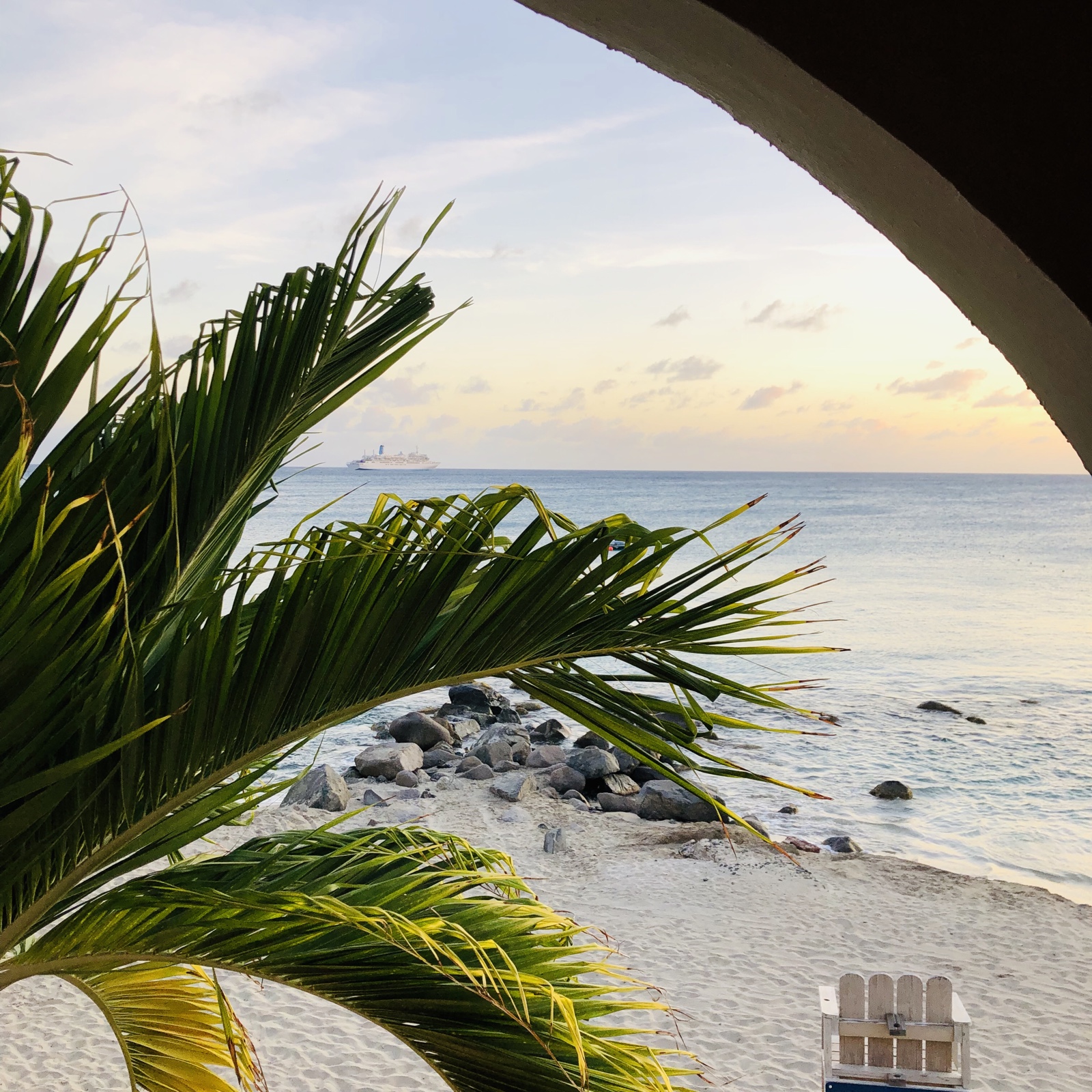 Things to do on St. Maarten and St. Martin

We were only on the island for a week, but we packed in a ton of sightseeing and exploring.

The main draw in coming to St. Martin/Maarten, for us, was the beach. Coming off the long New England winter there’s nothing that raises the spirits quite like warm white sand and crystal clear blue water. Luckily we found our “home beach” at Divi Little Bay to be more than up to the task of helping us forget about the sleet and snow. We checked out several other beaches around the island and while many were quite nice, Little Bay beach was our favorite.

One other notable beach worth checking out is Happy Bay. It’s out of the way, tucked around a bend and accessible via a walking path from Friar’s Bay. There’s no parking lot nor any amenities, but it’s quiet and beautiful. Parts of it are more clothing optional than others, so keep that in mind if it makes a difference to you. 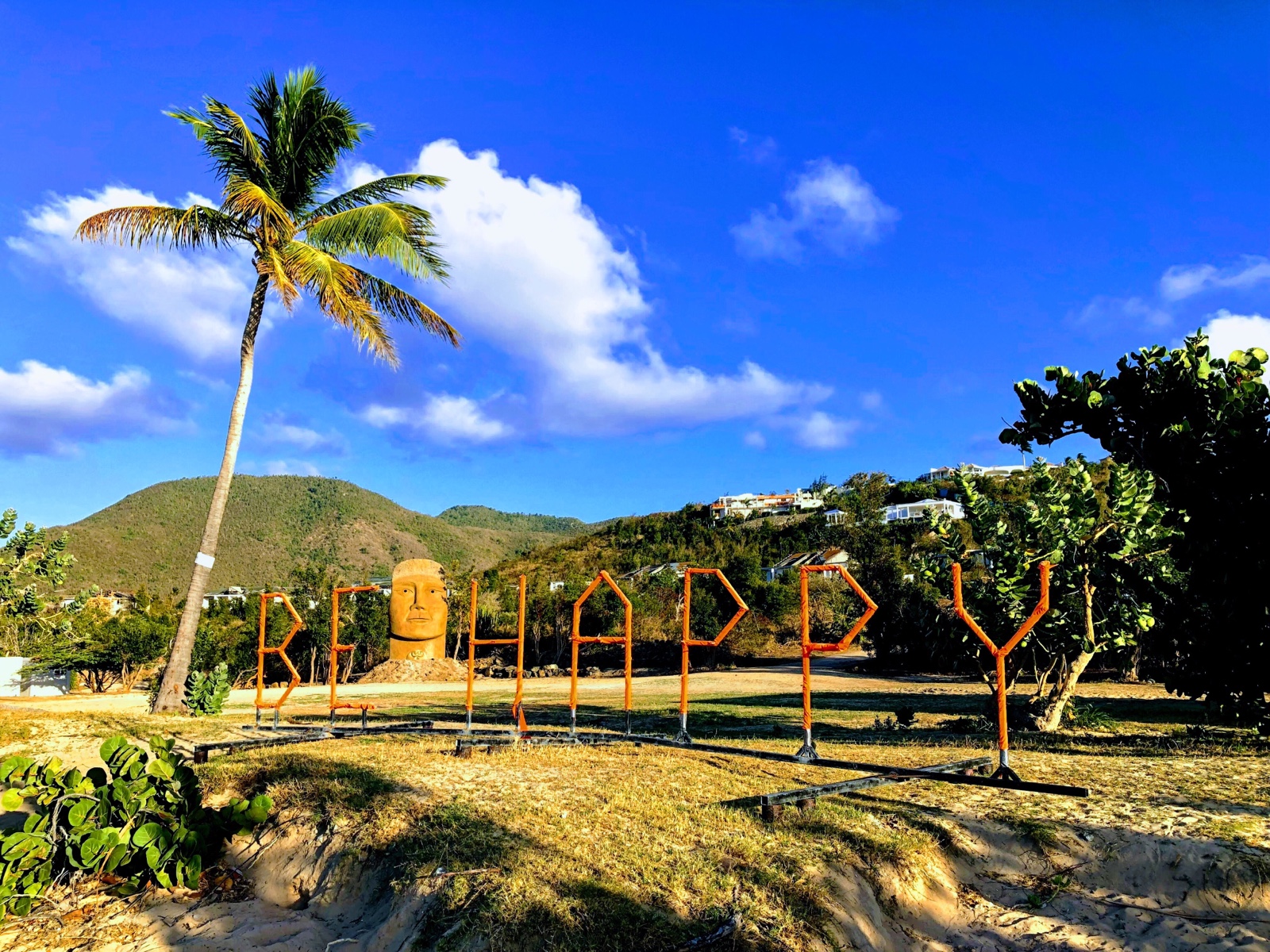 As much as we like lounging on a good beach we don’t often sit still for long, and we found a bunch of other fun things to do on the island.

The Rhino Safari is a self-piloted boat tour through the Simpson Bay Lagoon and around the northwest coast of the island. At the halfway point there’s a stop for snorkeling.

You are the captain of your own little center-console speed boat and it’s a blast zipping across the waves. Along the way you’ll see some crazy yachts (we saw Tim Cook/Apple’s yacht among others) as well as, sadly, many modern day shipwrecks.

An oasis in the middle of the island, Loterie Farm is a curious combination of chic pool/bar and high adventure ropes course. We took on the “extreme” course and it was a blast.

Our dive day was a disaster for me, personally, due to overwhelming seasickness but the diving itself was apparently nice enough. We saw a bunch of sharks and some Caribbean lobsters among other things… at least that’s what Kat tells me. I was too busy throwing up in my regulator to notice.

There’s plenty of shopping if that’s your thing. We weren’t super impressed with the market in Marigot, though there were a few neat local crafts hidden amongst the cruise-bait trinkets including sweet anodized aluminum wire jewelry that both Kat and AJ loved.

Ok so I saved the best for last. Actually it’s hard to pick a “best” thing on the island, but what really stands out in my memory more than anything else is the food.

I started calling the island Tropical France. No disrespect to the Dutch side, which had its share of excellent culinary experiences, but the overwhelming take-away for me was the French food. I haven’t even been to France, other than Charles de Gaulle airport, but when I go I sure hope the French food is as good as it was on St. Martin.

In no particular order, here are some of our favorites… 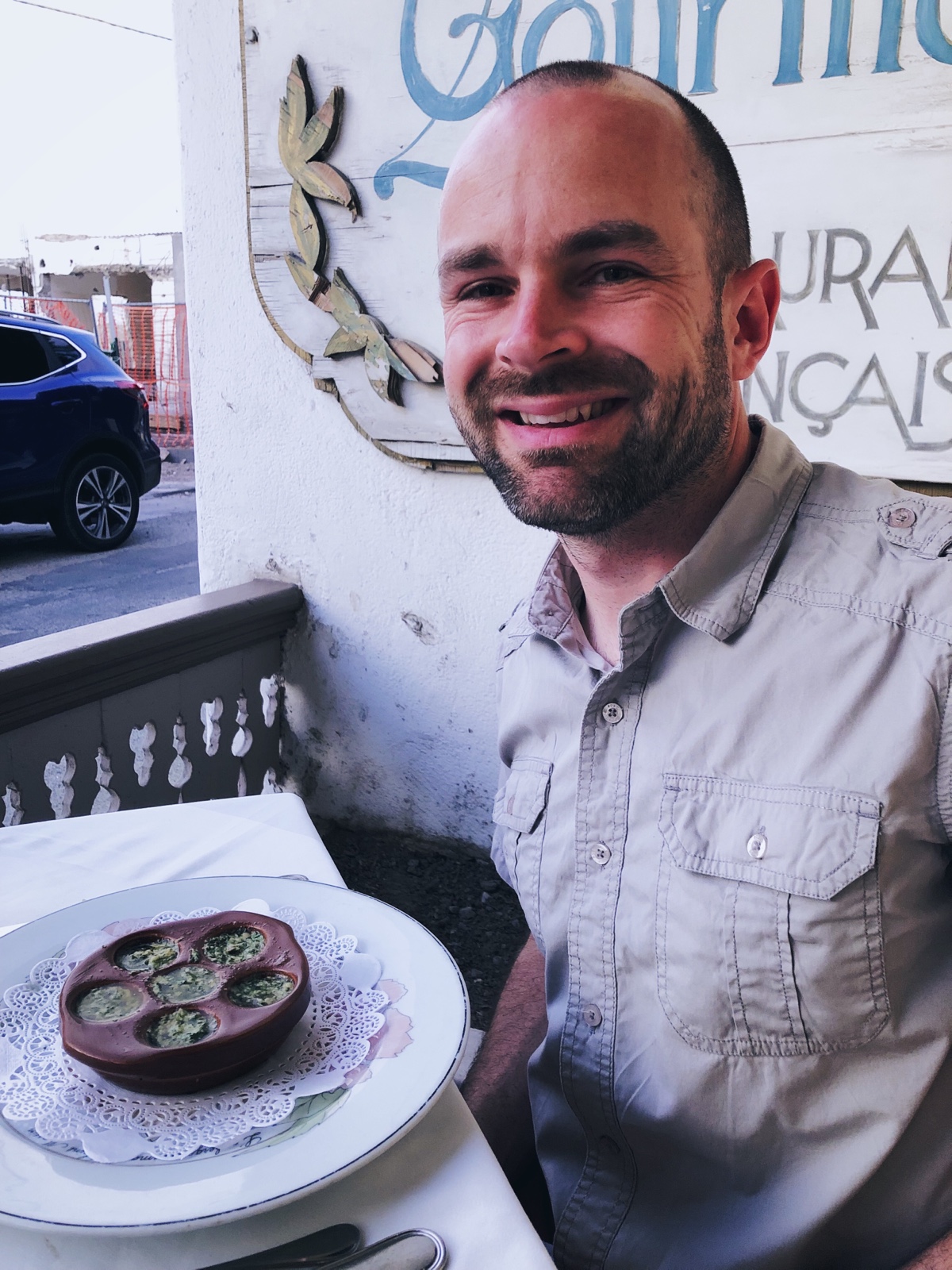 What is lobster thermidor? We didn’t know either. But apparently it’s a thing so of course we ordered it. It’s indulgent to say the least. This place gets 3 pictures. Best meal on the island and that’s saying something. 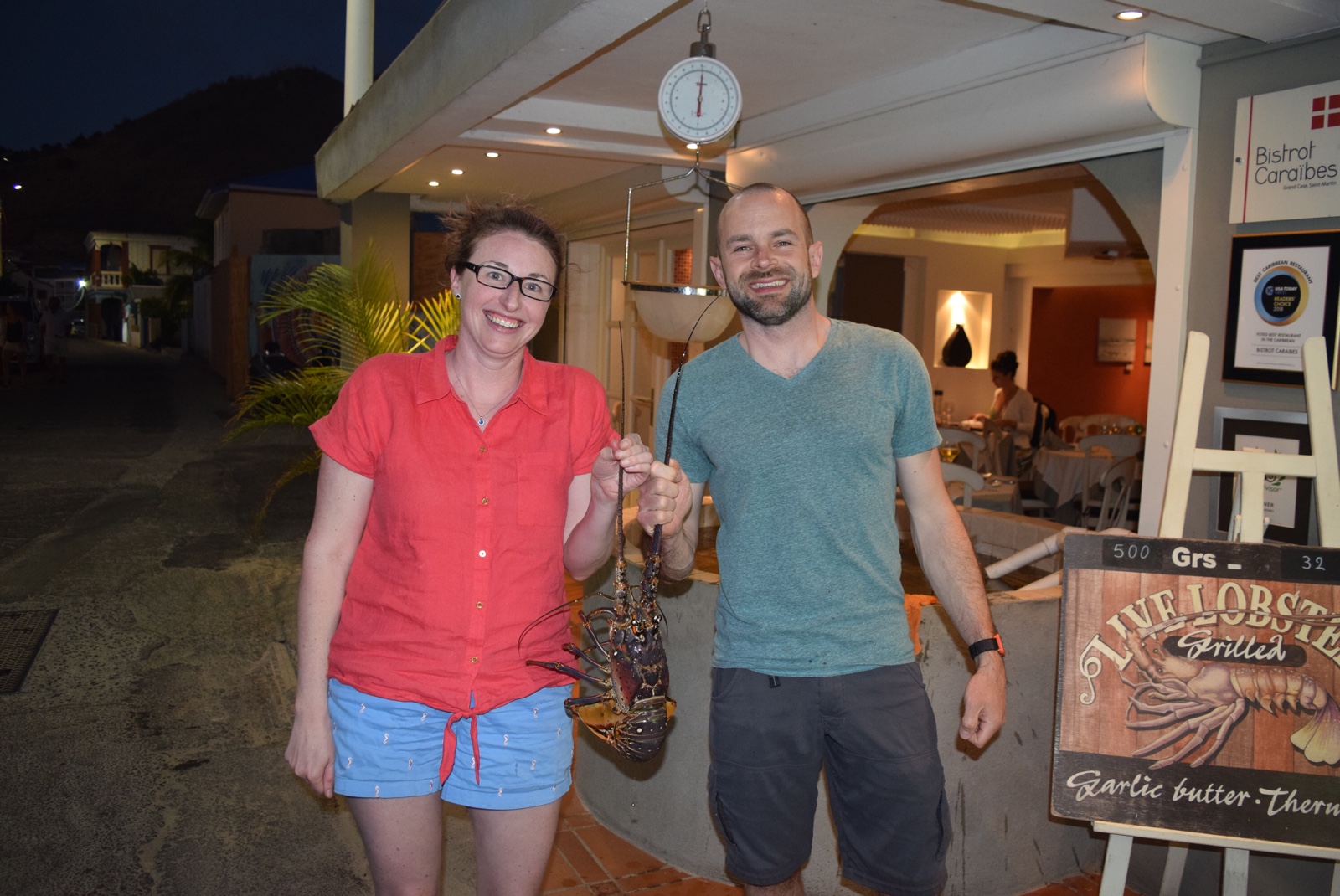 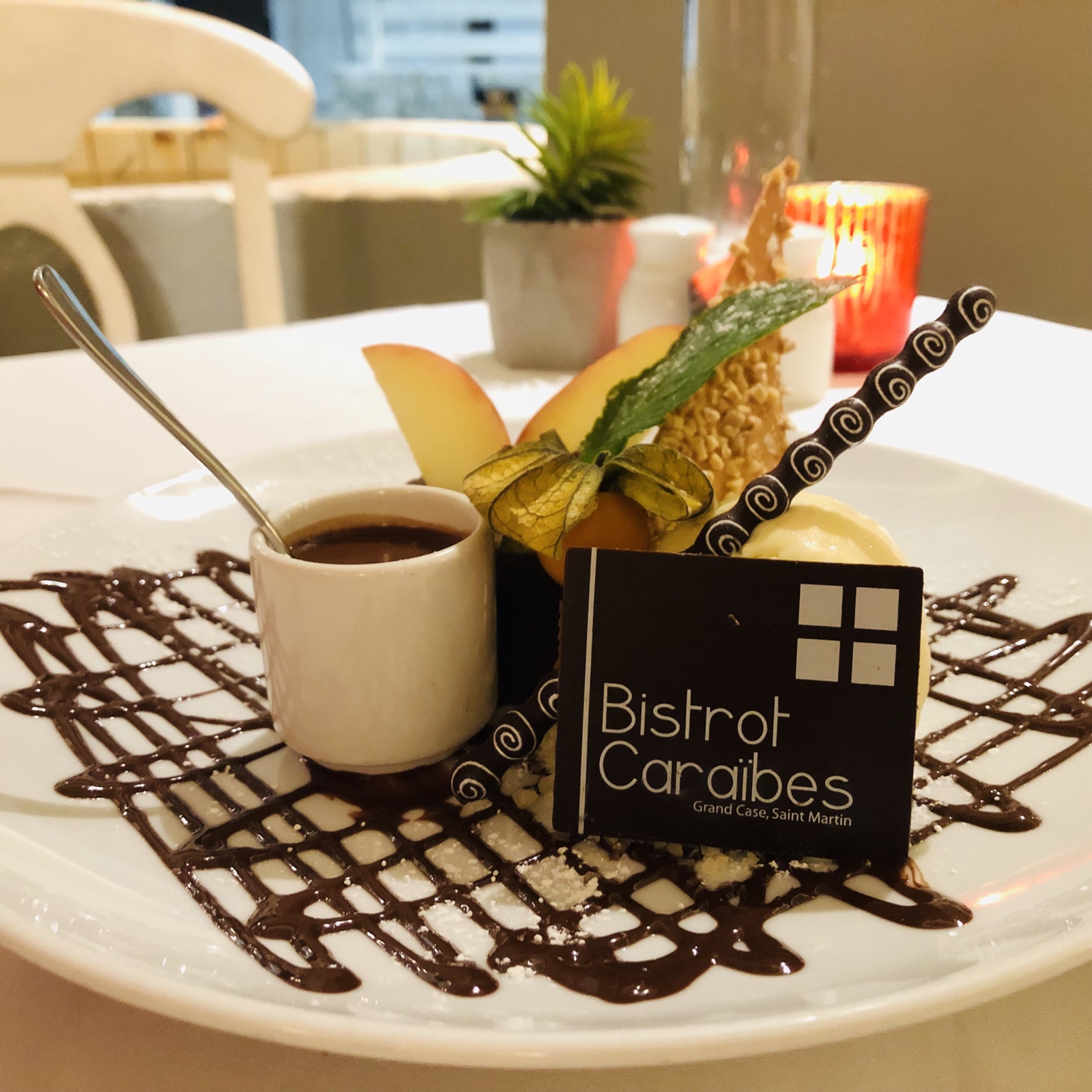 After an exhilarating and exhausting zip line adventure we sat down to recharge with a gourmet lunch of fancy organic food at the Loterie Farm restaurant. 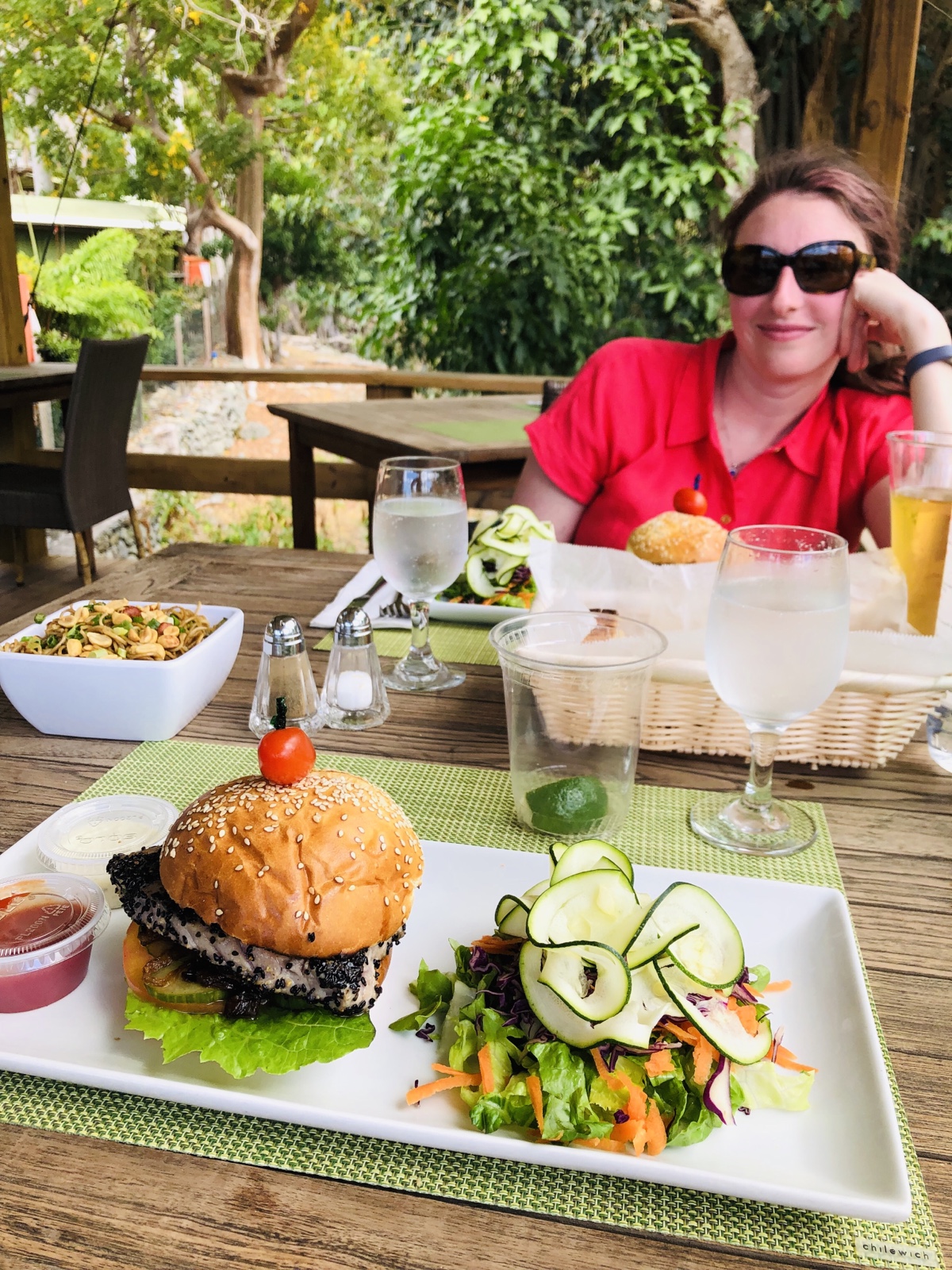 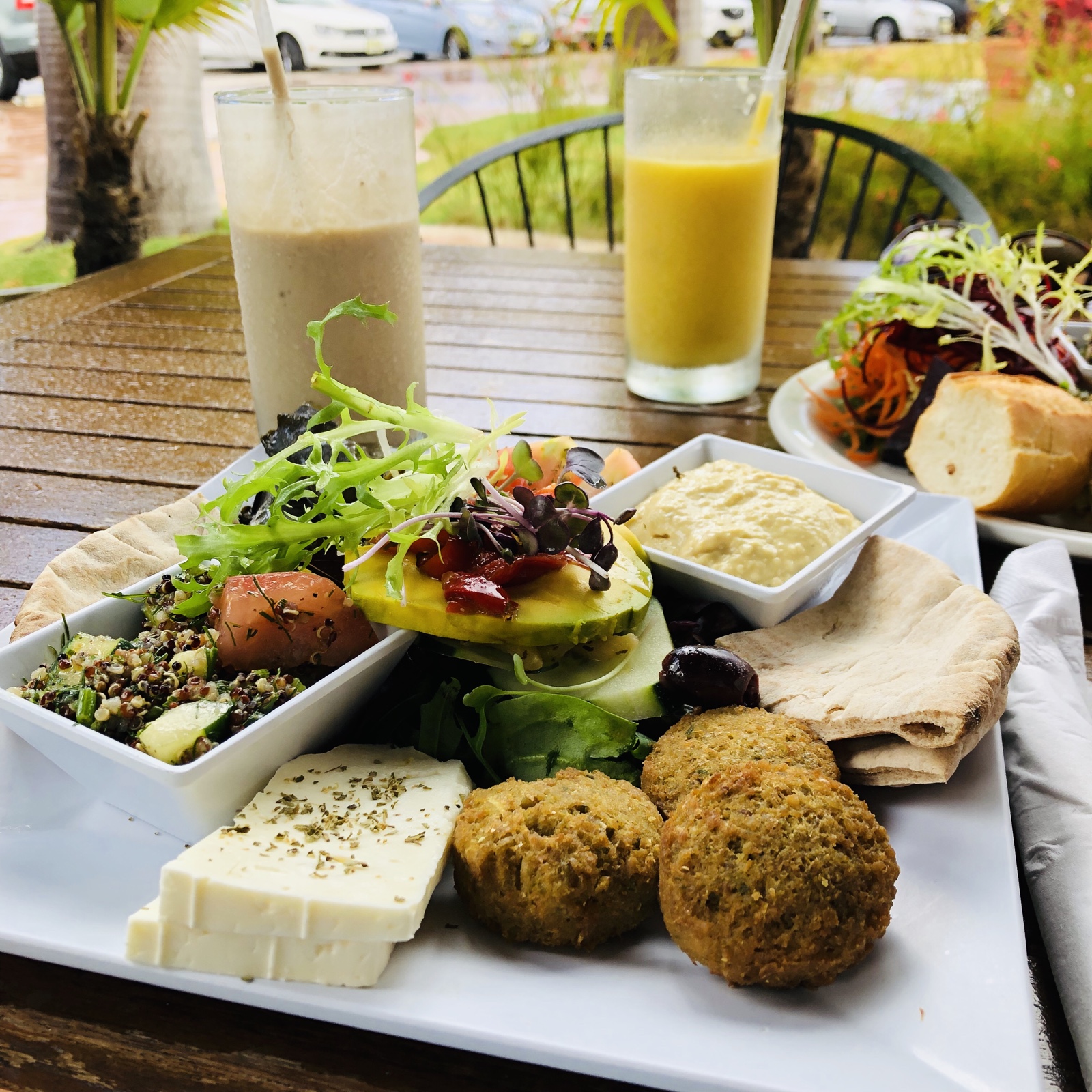 Fine dining in the French-side capital Marigot. The entrance on the street doesn’t look like much but the location overlooking the harbor is actually pretty nice. Artistic food presentation.

Decent staples at fair prices near the waterfront in Phillipsburg. Cheap public parking nearby at the marina.

Tranquil beachfront setting at the Holland House hotel back deck. We ate here our first night – it’s super convenient to Divi (park at the marina).

BZH is a pizza place in Oyster Bay. The tables are interspersed on terraced decks amongst a variety of plants and trees. It’s a cool setting and delicious inventive pizza and other treats. 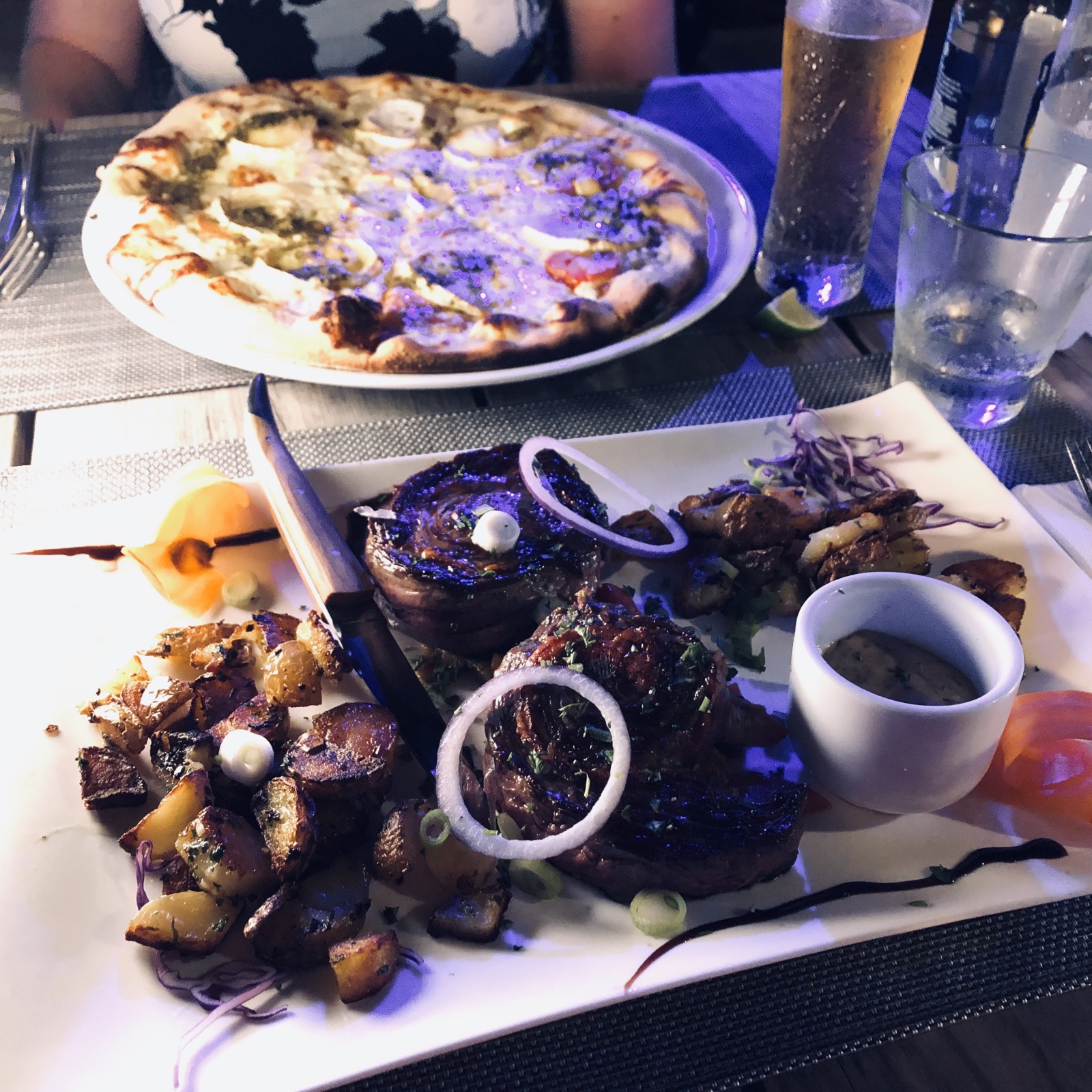 Get your sweets fix at this gelato shop combined with waterfront carousel in Simpson Bay.

All told it was a packed week and perfect anniversary getaway. St. Maarten (and St. Martin) has won 2 big fans.

Human person. Husband to the lovely and talented Kat. Father to Aurora, Jasper, and Piper - the smartest, cutest, funniest, and most adorable minis on the planet. Traveling the world with all four. Overall a pretty lucky guy. View all posts by Matt

2 thoughts on “Our 10th Anniversary Trip to St. Maarten”

This site uses Akismet to reduce spam. Learn how your comment data is processed.